POC, the voice of urban chickens

After urban beekeeping, Alvéole is turning its attention to urban chicken coops to raise awareness, but also to change the regulations governing them.

Dubbed POC, this project offers a start-up kit to urban dwellers interested in setting up a chicken coop on their property. For $1,149, they will become the proud owners of two hens, a mini urban chicken coop, food and litter for a complete season, an information manual, plus training and personalized support.

After founding Alvéole, a company that specializes in urban beekeeping and promoting local honey production, Alex McLean saw POC as the logical next step in the development of his entrepreneurial career and business. “POC is an extension of Alvéole, with the same desire to raise the general population’s awareness of the benefits of urban agriculture. We tend to think of cities as just places to live, but they can also be places where we can produce,” explained McLean. Inspired by changes to regulations in cities like Chicago, Seattle and Portland, where raising chickens is now allowed thanks to initiatives of this sort, the entrepreneur would like to do the same in Montreal. In addition to raising awareness about the advantages of urban agriculture, POC’s objective is to shift municipal by-laws in favour of urban chicken coops: right now, with some exceptions, it is against the law to raise chickens in Montreal. 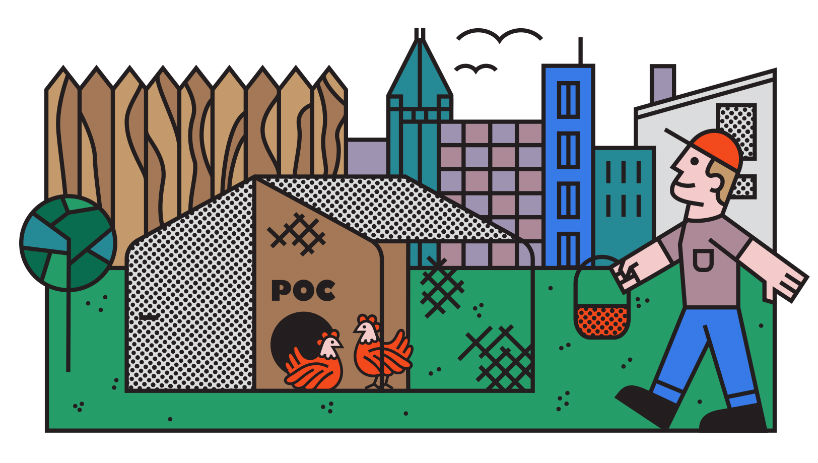 “Even though, for now, the city isn’t open to this type of installation, things are starting to change,” acknowledged McLean. “In the summer of 2015, Mercier-Hochelaga-Maisonneuve became the first borough to allow people to have chickens on their property, while in Rosemont-La-Petite-Patrie, there is a community group that has had chickens since 2011.” The entrepreneur believes this is where POC will have its greatest social impact. “It’s very difficult for an individual to change something on such a large scale. That’s why with POC, we’re going to join forces with everyone who wants to change these rules to give us more of a voice.”

“Raising chickens brings people together and can be a great experience for families. It’s also something that may resonate with big businesses, as did our apiculture initiative, which has been embraced by companies like Desjardins or Cascades who have introduced their employees to a unique activity.”

Stay tuned for a field trip in the spring to visit some of the first installations.

Accueil Bonneau and Alvéole join forces on an urban beekeeping project to help people get back on their feet. Accueil Bonneau works with homeless people in Montreal. Summertime brings hope and the chance...