AddÉnergie wants to give consumers the ability to use charging services on a monthly subscription basis, eliminating the need to have their own charging station.

The Shawinigan, Quebec-based company, which develops smart charging stations for residential, commercial and public markets, aims to develop the next generation of fast-charging stations for electric vehicles. The small business recently announced a $16.9 million initiative, which will receive financial backing from Natural Resources Canada ($6.7 million) and the Quebec Ministry of Economy, Science and Innovation ($748,000), supplementing $7.3 million from AddÉnergie itself and $1.9 million from various private partners.

This initiative will allow AddÉnergie to continue developing a new business model that will give consumers and businesses access to charging services on a monthly subscription basis, much like a cable television service. This formula addresses the cost barriers to buying and implementing charging infrastructure, both for the residential and commercial markets.

“Our goal is to give condominiums and businesses an offer similar to what they would get from a phone provider. We’re removing the barriers to entry by looking after installing the infrastructure. In return, customers pay a monthly subscription fee ranging from $80 to $120, based on their usage,” explained Louis Tremblay, president of AddÉnergie. “We’ve spent the past few months testing this type of model with some private companies, and the results have been very promising.” 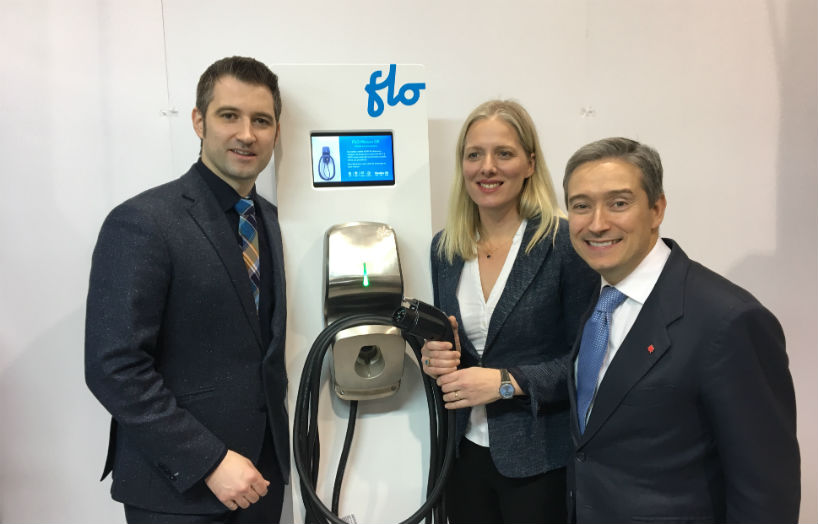 As part of this initiative, AddÉnergie will also install new charging stations to its curbside FLO  network in five major Canadian cities, including Toronto, Vancouver and Calgary, drawing on expertise developed during the rollout of several hundred charging stations in Montreal in partnership with Hydro-Québec and the City of Montreal. “This will be a pilot project involving 20 stations in each of these cities to gauge peoples’ response and assess demand in each of the different areas. Our goal is to develop and implement charging technologies for the next generation of electric vehicles in Canada.”

These projects will lead to the creation of 86 permanent jobs over 5 years and prevent emissions of more than 880,000 tonnes of greenhouse gases. They will also lead to the installation of over 1,000 new charging stations across Canada by 2019.

From the Galeries d'Anjou in Montreal to the Pacific Centre in Vancouver, fifteen Cadillac Fairview shopping centres across Canada will be offering electric vehicle chargers. Cadillac Fairview, owner of one of North...