“This van is equipped with a unique system that extends the life of old vans by converting gas-powered vans to electric-powered vehicles,” said Carl Pichette, vice-president of marketing for Sobeys, IGA’s parent company. The electric engine conversion kit has a considerably longer lifespan (1 million kilometres) than a conventional gas-powered vehicle’s engine. It is reusable, meaning it can be installed in another vehicle. The rechargeable battery has an electric range of 150 km. “This is particularly important since IGA’s delivery vehicles travel approximately 120 km per day, so this battery should be capable of lasting a full day.” It takes six hours to fully recharge the battery using a 240-volt charging station. 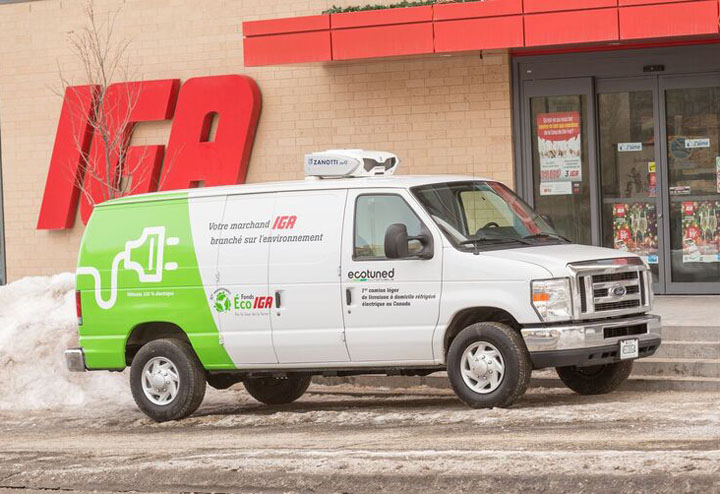 This electric conversion system was developed by the start-up Ecotuned. “Its design is based on the principle of the 3Rs (reduce, reuse, recycle), and helps reduce greenhouse gas emissions related to fuel combustion, old trucks being sent to the scrapyard and the production of new vehicles.” IGA estimates that the use of this electric system should lead to gasoline savings of roughly $3,000 per year and a reduction in greenhouse gas emissions of 9 tonnes per vehicle. 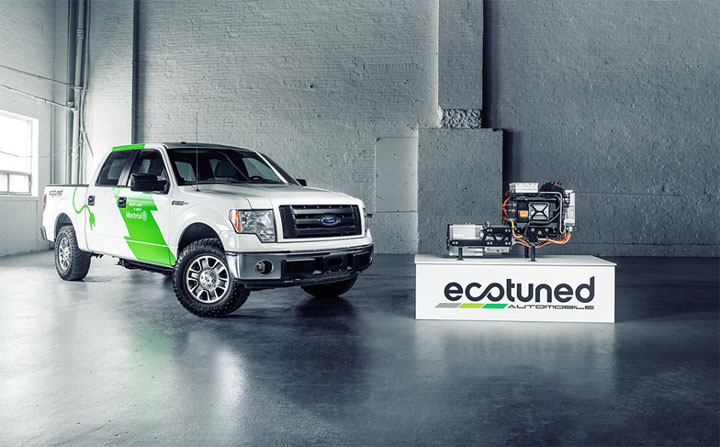 This prototype van, introduced a few days ago in Sainte-Foy on the 10th anniversary of the Fonds Éco IGA, is part of a pilot project. “The goal is to test the vehicle on the roads to ensure everything runs smoothly, especially in winter. We’ve had very encouraging results so far.”

The partnership with Ecotuned is an opportunity to develop our knowledge faster with a view to developing a whole fleet of electric delivery vans. “We want to learn as much as we can about this type of van so we can get around to all our stores across Quebec. Could this be a solution for the future? Possibly.” First, it will be important to get a better understanding of the system’s economic profitability, both in terms of converting existing vans to electricity and using electricity instead of gasoline. “The van is more expensive right now than it will be in 3 to 5 years. By then, the technology will be more accessible. We’re ready to invest with Ecotuned to help them accelerate their growth while we work on furthering our knowledge.”

Starting this spring, the van will be going on tour visiting IGA stores in various regions of Quebec. “This will give us a chance to thank them for their financial contribution to the Fonds Éco IGA. Stores will also have a chance to win one of four electric home delivery vans to mark the 10th anniversary of the Fonds.” The Fonds Éco supports environmental projects, such as an in-store residual waste management program and workshops to raise consumers’ awareness of food waste.

In London, streetlights are being transformed into charging stations for electric vehicles. Developed by the German company Ubitricity, this solution for owners of electric vehicles consists of a personalized charging cable with...

AddÉnergie wants to give consumers the ability to use charging services on a monthly subscription basis, eliminating the need to have their own charging station. The Shawinigan, Quebec-based company, which develops...

Vancouver-based company planning to start delivering a single-seat electric car that will redefine urban commutes. Solo is designed for the urban dweller who does most of their driving alone in...