From the Galeries d’Anjou in Montreal to the Pacific Centre in Vancouver, fifteen Cadillac Fairview shopping centres across Canada will be offering electric vehicle chargers.

Cadillac Fairview, owner of one of North America’s largest real estate portfolios, which includes the HSBC Building in Vancouver and the Deloitte Tower in Montreal, recently announced a collaboration with the FLO network. Developed by the Quebec company Addénergie, FLO is Canada’s largest electric vehicle charging network, with more than 3,000 stations from coast to coast. Fifteen Cadillac Fairview shopping malls, including the Toronto Eaton Centre, Galeries d’Anjou in Montreal and the Rideau Centre in Ottawa, will be equipped with charging stations. “We’ve been in talks with Cadillac Fairview for several months about installing such a program,” explained Louis Tremblay, president and CEO of Addénergie and FLO. “The company sees it as a way of developing its corporate social responsibility policy, but also as a way of improving the client experience in each of its shopping centres.” 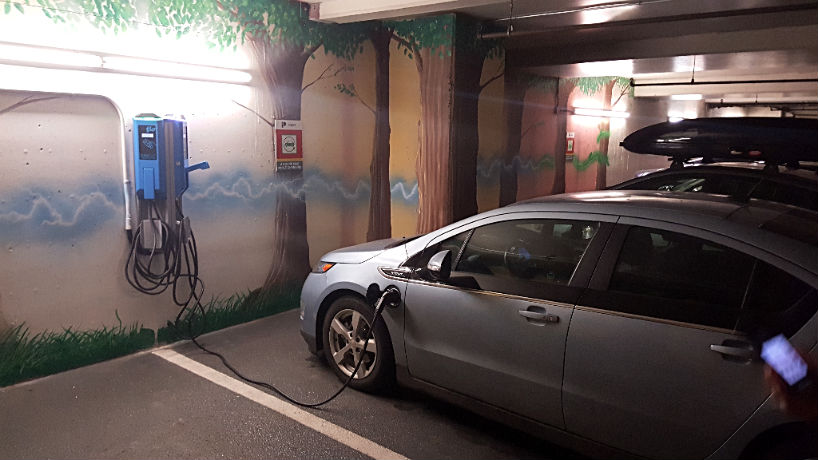 A charging station at the HSBC Canada Building in Vancouver

Cadillac Fairview’s electric vehicle charging stations will support at least three chargers, operating at two different capacities: two Level 2 chargers, which require approximately 3 to 4 hours to replenish up to 80% of a vehicle’s capacity, and one fast charger, which requires approximately 30 minutes to reach the same capacity. “At Cadillac Fairview, we are dedicated to making strategic investments that drive growth, innovation and corporate responsibility. We want to make our guests’ visits to our centres an opportunity for them to recharge their vehicles or encourage them to make the shift to electric vehicles,” indicated Sal Iacono, executive vice-president, Operations, Cadillac Fairview.

The charging stations installed in the Cadillac Fairview properties will be connected to the FLO network and mobile app, allowing users to easily locate available stations, monitor the progress of their charging session in real time, make payments, and access direct customer service support. The app currently has 20,000 users across the country.

Cadillac Fairview already has 60 charging stations in its offices and shopping centres, and these stations will be converted to the FLO network. With this partnership, there will be a total of over 100 stations, including 15 fast chargers, available in the group’s properties by the end of 2018. “More and more big companies are becoming interested in electric vehicles and charging systems,” indicated Louis Tremblay. “And a greater number of them are jumping on board, like Canadian Tire, which announced last December that it would be installing 25 stations in Ontario stores. There are going to be more announcements like this in the next two months. This is just the beginning!”

AddÉnergie wants to give consumers the ability to use charging services on a monthly subscription basis, eliminating the need to have their own charging station. The Shawinigan, Quebec-based company, which develops...